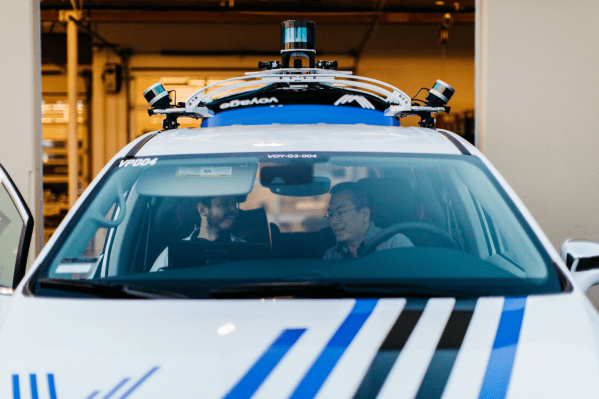 Voyage, the autonomous vehicle startup that spun out of Udacity, has been acquired by Cruise, a deal that points to the continued consolidation within the nascent industry.

Financial terms of the deal were not disclosed; the majority of Voyage’s 60-person team will move over to Cruise and the company’s co-founder and CEO Oliver Cameron will take on a new role as vice president of product.

Voyage, which was founded in 2017, was a tiny startup compared to well-funded operations like Cruise, Argo AI, Waymo and Aurora. But despite its size and only raising $52 million, Cameron helped Voyage stand out. The company is best known for its operations in two senior living communities. Voyage tested and gave rides to people within a 4,000-resident retirement community in San Jose, Calif., as well as The Villages, a 40-square-mile, 125,000-resident retirement city in Florida.

“Voyage’s approach has always been to leverage our limited resources to deliver a product that restores mobility to those who need it most: senior citizens. We’ve made tremendous progress towards this goal, moving countless senior citizens (some as old as 92!) around their communities,” Cameron wrote in a blog post announcing the deal. “Now at Cruise, we are thrilled to have the substantial resources to eventually serve not just senior citizens, but every possible demographic who stands to benefit from self-driving services.”

Cameron’s role as VP of product is another signal that Cruise is inching forward with plans to launch a commercial robotaxi service in San Francisco. Cruise has hired hundreds of engineers, both hardware and software, but it will need to win over customers if it hopes to build a loyal base of robotaxi users. In his new role, Cameron will be the one who will be thinking through every customer touchpoint for Cruise’s self-driving service.

Cameron described the union of Cruise and Voyage as a “wonderful marriage,” in a tweet Monday morning. He noted that Cruise has the “most advanced self-driving technology, unique auto partners and the first purpose-built self-driving vehicle.” “With Voyage and our customer-service obsessed team, we’ll together deliver a game-changing self-driving product.”

1️⃣ @cruise + @voyage is a wonderful marriage.@cruise has the most advanced self-driving technology, unique auto partners, and the first purpose-built self-driving vehicle.

With @voyage and our customer-obsessed team, we’ll together deliver a game-changing self-driving product.

Cruise has the funds to put towards this component of the business. Earlier this year, Cruise said it raised $2 billion in a new equity round that has pushed its valuation up to $30 billion and delivered Microsoft as an investor and partner. GM, Honda and other institutional investors also put more capital into Cruise as the autonomous vehicle company inches closer to commercializing its technology.

A.I. Is Not What You Think

Samsung Galaxy A52 5G appears on Amazon and in press images