Movies Anywhere, an app that allows you to centralize your digital movie collection from across services, is rolling out a new feature that will help you make better sense of your growing library. The company today introduced an AI-powered feature called “My Lists,” which automatically groups movies together based on any number of factors — like genre, actors, franchise, theme and more.

For digital movie collectors with larger libraries, the feature could make browsing through the available options feel more like scrolling through the recommendations you’d find on a modern-day streaming service, like Netflix. That is, instead of scrolling down through endless pages showing you all your purchased movies in order of purchase or alphabetically, as before, you can now quickly scan rows where the content is organized in ways that make it easier to discover what’s actually in your library.

For example, if you had purchased all the movies from a particular franchise, they would now be on their own row together. This is an improvement over how you had to locate these movies in your collection before — where they’d be sandwiched between the other titles you bought in between the franchise purchases.

You may also discover that you own a lot of movies within a particular category, like “Action Thrillers,” or those with a central theme, like “strong female friendships,” which could help you narrow down your movie night selection.

These algorithmically created lists can also be edited, allowing you to add or remove titles — or even delete the list altogether. 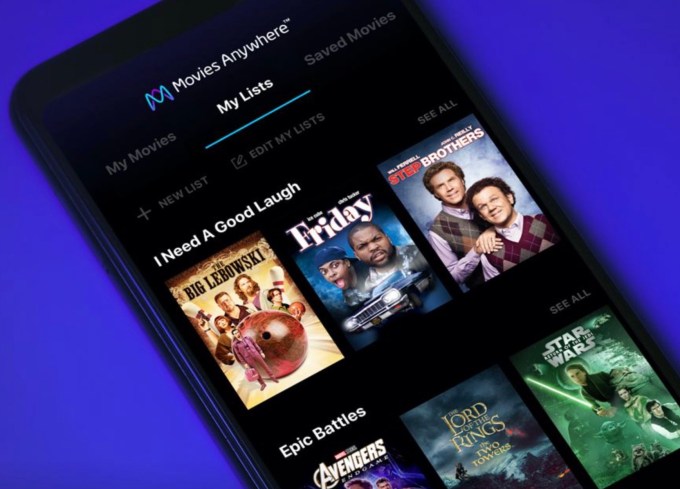 Plus, you can now make lists of your own, too. So you could make a list of favorites, movies you want to watch with your family, or however else you want to further organize your collection. You could even use the feature to make a “to watch” list of movies you’ve purchased, but hadn’t yet made time for.

The Movie Anywhere app has been around for years, but is now jointly operated by Disney, Universal, WB, Sony Pictures and 20th Century Fox, after migrating to a new platform back in 2017. Its biggest selling point for digital movie collectors is that you can in one place get to all the movies you bought from various services. That includes digital downloads offered by iTunes, Vudu, Prime Video, YouTube, Xfinity and others. Before, you would have to switch from app to app to figure out if you had ever purchased a given title.

My Lists is one of many features the company has added over time to keep its app feeling current. Last year, for instance, it introduced a digital movie lending feature called Screen Pass, and it earlier had launched a co-watching feature called Watch Together, which let users watch with up to nine friends.

The new My Lists is available today in the Movies Anywhere mobile app, desktop and on streaming devices from the navigation bar.

They Still Live in the Shadow of Theranos’s Elizabeth Holmes